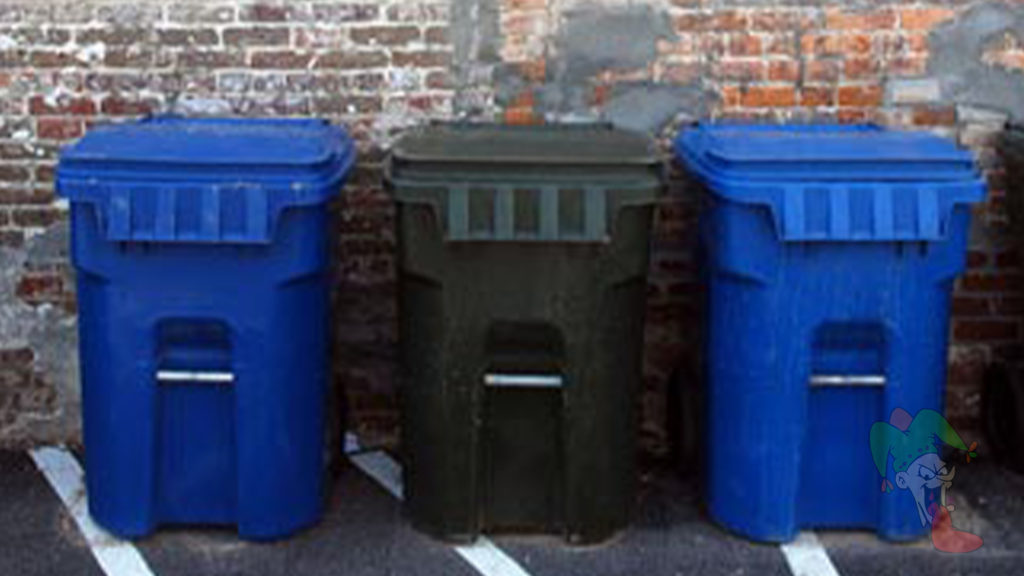 Your website is entertaining as all Hell. Kudos to you, sir.

My recycle truck driver is a jerk. Since I moved into my home, three short years ago, I’ve had to replace the big blue bin twice because this jerk either throws it to the curb by hand (for some reason he comes the other way on my short rural street sometimes and has to get out and wheel it to the other side of the truck) or slams it down with the truck’s can lift.

The third time he broke it I replaced the wheels myself, then woke up at 5:30 to watch him. Sure enough, he pushed it from 5 feet out, and it went skidding on its side. I went and got on my bike, and went to a nearby street, and waited for him. I rode up and asked him if he had a problem with me – he clearly didn’t know who I was.

I told him to please stop slamming my bin, yes, they replace it for free, but I have to be home to sign for it in the middle of the day.

I work, too. Not always from home. Next week, the bin wasn’t emptied. There was a note taped to the top, they couldn’t collect because there were food items inside the bin. There was a cat food bag that had roughly a handful of food left in it. And I had put that in the garbage last thing.

So I know he pulled it out, and put it in his bin, then left the note. So reading more about recycling, no longer will I toss bottles and cans inside. I pay a deposit for those, why should I pay somebody to get that deposit back?

I’m only putting cardboard in the bin. They have a weight limit of 80 lbs, so I’m trying to fill it right to 79 lbs before I put it out on the curb, but I want to expose his jerkiness as well.

Thanks a lot for any ideas.

Don’t you just hate small people with a little bit of power?

This asshole just wants to ruin other people’s days because he has the power to “do or not do” his job. Some people may defend him by saying he’s just doing what he’s supposed to do, it’ good for the environment, yada yada, but the truth is he’s a miserable worm that wants to take out his hatred for his pitiful excuse for a life by creating small amounts of havoc on other people the only way he can, by refusing service.

Unfortunately I am sure he’s well prepared to just keep doing whatever it is he wants, or doesn’t want, to do in the name of his job so filling the bin to the maximum, although a great idea, will just give him a reason to not do his job again.

Maybe having a drone record him and reporting him to the city department of waste management is the way to go here. I’m sure his union won’t let him get fired but with enough complaints he may just become some other neighborhood’s problem.

So, talk to your neighbors, amass your complaints, get some video and start complaining with the real evidence you need to move this piece of work to another route.